skip to main | skip to sidebar

"Master Dayton" might be humorous, (I mean if Ph.Ds are called "Doctors," shouldn't MFAs be called "Masters?") but in all seriousness I have made a living freelance writing and after several years I have tons of information I want to share to help out my fellow writers, regardless of age, experience, goals, situation, or background. This blog isn't pretty-but it will help if real freelance writing information is what you want.

Freelance writers and would be freelance writers, yes, you read that title right. Let's be frank here: most writers are incredibly stubborn whether they have accomplished something or not. Or most would-be writers are stubborn. The ones who choose to learn, adapt, and change thrive. The others who don't call us hacks or liars when we say you can make a living writing online for money. But even beyond this, there is a difference between writers who always work extremely hard and never make much beyond the $20-30,000 a year range while working 70 hour weeks and wonder why things never get easier, and then there are the online freelance writers who learn to make really good passive income and have the freedom of time, place, and income that most freelance writers dream of, but never achieve.

So what's the difference? It rarely is the best writers who accomplish the dream freelance writing life style they envision, and many times it's not even the smartest. Why is making passive online income so damn hard?

Well I'm going to show you, using numbers of mine back when I had absolutely no clue whatsoever what I was doing and hadn't found any number of great blogs or mentors to learn from. A lot of these numbers will look familiar to struggling freelance writers, and underscores why you are more likely to work yourself to the point of mutation (and if you're going to I suggest going for telekinesis - the Fire Starter thing is so 1980's) than you are to make a full time living off of passive income if you're a stubborn writer, or one who simply doesn't understand how residual income works.

We'll call the old writer and his numbers "True Noob." This isn't meant to be mean, it was just a pretty accurate description. He's going to try to build passive income using AdSense (mostly through Hubpages & Xomba), Constant-Content usage rights articles, Associated Content's PPV, and Squidoo. Okay, the one thing the writer did right was thinking about multiple income streams. That way if one site folded down the line, all the hard work wouldn't disappear with it.

So at the time the writer figures out what each article, hub, or lens is making on average per day based on the passive income already coming in. This writer knows pretty much nothing about article marketing, back links, and hasn't found Justin's SEO blog or Court's Internet Marketing blog or Grizz's Make Money Online blog. So True Noob is swinging and missing, but credit where credit is due, he's persistent and does the numbers.

These are all mathematical averages, and depressingly low numbers. And to freelance writers who don't know anything about marketing their work or SEO, this probably sounds closer as opposed to the much higher numbers that writer who know what they're doing are reporting.

So based on how many articles (or hubs or lenses) True Noob can write in one 12 hour work day, he figures out how long it would take him to get to $100 a day passive income, assuming the numbers he had so far were accurate reflections. He then tried to figure out how long it would take working 12 hours a day, EACH and EVERY day, all 365 days a year.

For Associated Content, this was 4 years, 207 days. That's if he worked each and every day 12 hours a day, one article an hour.

If you're trying to translate that into normal 40 hour work weeks, take the numbers given and multiply them by 2.2, more or less. And then you're probably still hitting low.

Not good and not a chance. If True Noob seriously tries this, he's more likely to develop multiple tumors that press into usually dormant areas of the brain, creating the ability to read minds, move objects, or possibly start fires with no more than an angry thought. At this point, becoming a super villain and fighting for world domination is more likely than ever making $100 a day in passive income.

But some of you are asking, "Wouldn't you have to be a total idiot to be able to write 10,000 articles and not make solid passive income." Most definitely. Or at least ignorant.

Some of these numbers are off. There are many problems with this idea. With that much sheer writing, even by accident True Noob is going to hit some "home run" articles that hit well above average and earn well above the average. Second, there are other options like ehow that this writer didn't even know about.

But this idea of just making it by sheer effort is idiotic, and these numbers prove it. So what's the difference? Knowing just a little bit about marketing, SEO, and learning about the real ways to make money with AdSense will boost earnings way up dramatically. Instead of just throwing up articles on any and everything, use keyword research and SEO to earn a LOT more per article, hub, lens, or whatever else. Also keep in mind, that True Noob figures out keyword research, and suddenly less time is wasted with useless articles that will never make serious (or any) passive income, while every article after that will make a lot more.

That's part of writing online. If you are an online freelance writer who wants to be able to make a full time living on passive income (a la "The 4 Hour Work Week"), then you MUST learn SEO, keyword research, and how to make money with AdSense.

Could someone make a full time living on passive writing income with Squidoo, Hubpages, ehow, Xomba, Associated Content, and the other sites? Sure, but it's a lot harder and knowing SEO and keyword research is still critical. There's no way around that.

Anyone who is trying the results by volume approach like the old True Noob, here's one last bit of evidence. When I really had no idea what I was doing, 140 articles on Associated Content made me about $13 in passive income a month. When I began to learn about SEO and keywords, I took one single article on AC and got it 4 back links. The result? That one article makes me $10 a month in passive income each and every month. Now if every article you wrote made $10 a month or more in passive income, 300 articles or less would make you over $36,000 a year in passive income. That's much better than 10,000 or 20,000 articles. One good article a day that earns that much, and the back links, can get you where you want to be.

Is it "just that easy" to get that level of articles? No, it's not. You have to do the research, write the article, collect the back links, and then sometimes you have to wait for the articles to age and gain authority. But it is far more plausible.

Learn about AdSense, and you can do even better. Have multiple income streams, and learn SEO and keyword research, and you will definitely be on your way to the freelance writing dream. Either that or try it the old way, sprout some horns, grow some awesome telekinetic powers and wreak havoc. But either way, it's easier to just learn SEO and keyword research. Even a basic knowledge of these skills can be a godsend for a prolific writer.
Posted by Master Dayton at 11:06 AM 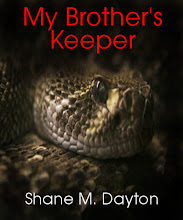 Proud of my first fiction published on Kindle

I Use Host Gator for ALL my Niche Site Hosting

The Absolute Best Book about Becoming a Magazine Writer

The Single Best Book on Writing I've Ever Read

The Second Best Book on Writing I've Ever Read

Who is Master Dayton?

Master Dayton
I became a freelance writer because I was forced to after busting both of my legs in a car accident and running out of money with bill collectors calling. I love writing and want to help others avoid the mistakes I had to learn the hard way and start making money writing fast. Why "Master Dayton?" I joked with my sister-in-law that if Ph.D's were all called doctors, that MFA's should be called masters, so she could call me Master Dayton. She laughed and the joke has been funny enough to stick (don't worry - it's self deprecating, not ego :D)

Life After the Cubicle

Justin's e-book on escaping corporate life is one of the best I've read.